Kintamani is a tourist highlight on the island of Bali, Kintamani Bali tourism is always crowded with local and foreign tourists.

Kintamani Bali Tourism Object is one of the many List of Attractions in Bali as well as is travel highlights world-famous, the main attraction of this tourist attraction lies in the natural charm of the view of Mount Batur, Lake Batur and many others.

Natural scenery and enjoyment are activities that tourists like while on the island of Bali, both local and foreign tourists to explore the beauty of the charm and wealth of Kintamani natural tourism.

There must be a question "What's so interesting about Kintamani Bali?".

JIf you have this question in your mind, of course it is natural because there is a saying that says "Do not know, then do not love".

On this page, let's find out what's interesting about ? First, let's agree together that Khospitality The local people of Bali themselves make many people want to go back to this island of a million temples and attractions.

This is inseparable as well as in kintamani, Kintamani local community always welcomes tourists in a friendly manner.

As if they understand very well this is the most important capital that will impress people after about 2 hours of traveling from Denpasar City to arrive at the Kintamani tourist area.

Traveled with a distance of 68 kilometers from Denpasar or Kuta. Kintamani has a view of the mountainous area at an altitude of 1.500 m above sea level.

With its very unique and amazing natural scenery, a place commonly called look which corresponds to its name in Balinese which means “place to sightsee” is the most strategic location to enjoy the natural scenery from a height.

And this time we will not discuss Penelokan Kintamani because Penelokan is one of the places that is already common and the most visited by tourists while on vacation to Kintamani.

Penelokan Village is a stop point during lunch or a top point venue which is usually found in regular Kintamani Ubud tour packages that are often offered by travel agents/bureaus.

As for what we will discuss this time is  5 Attractions of Kintamani Nature Tourism the favorites and anti-mainstream tourists when visiting Kintamani are as follows;

1. Lake Batur
Lake Batur it is located in North Penelokan Village 10 km or 25 minutes downhill from Penelokan Atas which is usually a tourist spot for Kintamani Bali or a stop point for tourists' lunch (Restaurant: Lake view – Grand Pancasari2 and others). Located on the slopes of Mount Batur, this lake is crescent-shaped when viewed from a height.

The active caldera of Lake Batur 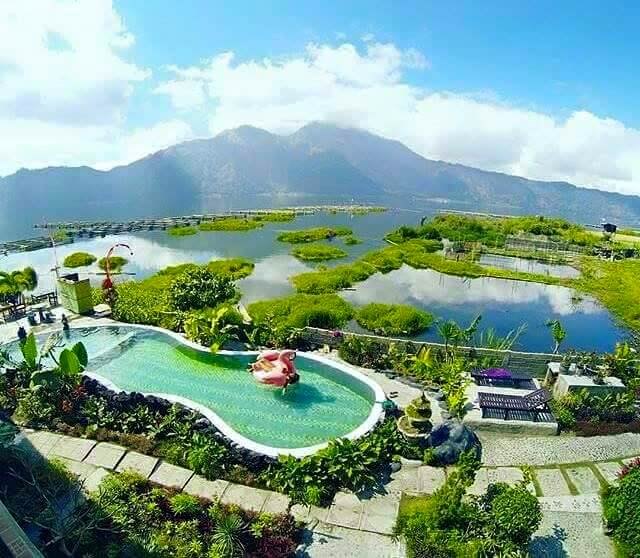 Has an active caldera the most beautiful in the world, with an area of ​​16,6 square kilometers.

Lake Batur Kintamani is the largest lake on the island of Bali and the second largest caldera lake in Indonesia after Lake Toba in North Sumatra.

Batur Caldera This crescent-shaped shape was formed by a series of violent eruptions and these eruptions helped shape the entire landscape of the island of Bali.

The first eruption of Mount Batur, which is estimated to have occurred around 29.300 years ago, began with the vomit of 84 cubic kilometers of ignimbrite (volcanic material).

Did you know that the color of the water in Lake Batur Kintamani can change? The color change is influenced by the sulfur compounds at the bottom, so sometimes it looks bluish and then turns yellowish green.

Most tourists who visit Kintamani can only see the view of the lake from a height or from the restaurant in the Penelokan village. However, there are also foreign and local tourists who want to get around in the middle of Lake Batur by renting a boat, taking pre-wedding photos or visiting Trunyan village.

Earlier we discussed about Lake Batur in the Kintamani Bali Tour which was formed as a result of the eruption Mount Batur. And this time we will discuss Mount Batur itself.

Mount Batur has been recorded to have erupted 26 times and the most devastating occurred on August 2 and ended on September 21, 1926. 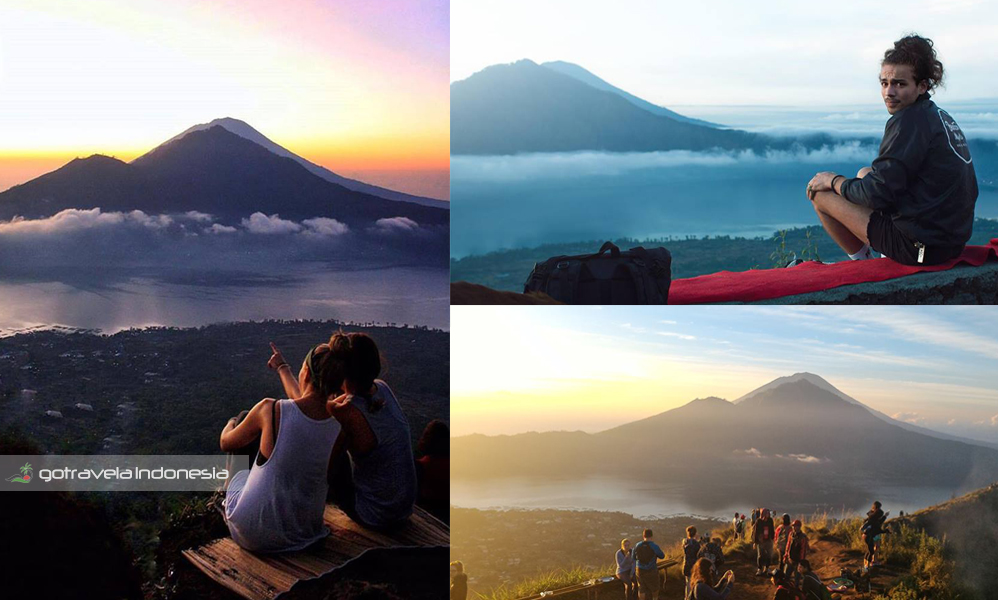 It is said that according to the story in the Lontar Susana Bali, Mount Batur is the peak of Mount Batur Mount Mahameru which was moved by the Batara Pasupati to become Sthana Betari Danuh (Dewi Danu's palace).

Do not dismiss the possibility that makes Mount Batur has a million charms of beauty.

Mount Batur is usually often used as a place hiking for mount batur climbers who want to feel and see the beauty of the sunrise at an altitude of 1.717 meters above sea level.

Likewise, the expanse of black rocks from the eruption is very very interesting as a location for pre-wedding photo shoots.

3. Trunyan Village
On the Kintamani Bali Tourism Page, the next is Trunyan Village located on the outskirts of Lake Batur or at the western foot of Bukit Abang in Kintamani.

Trunyan Village is one of the very unique tourist destinations in Bali, Trunyan village is a village inhabited by natives of the island of Bali, which is commonly called from "Baliagawith aspects of its cultural uniqueness.

The meaning of the name of Trunyan Village is divided into two words, namely "Legend" and "mean" Taru is the "Tree" or the Plant of life while incense is the "fragrance".

So, the meaning of the word Trunyan is a fragrant fragrance that comes out of the taru tree and the presence of the tarunyan tree there which neutralizes the stench generated from the corpse and becomes a tourist attraction.

The uniqueness of this village is the method of burying the corpse, which is not buried at all, but is laid or placed under a large tree called Taru Menyan. 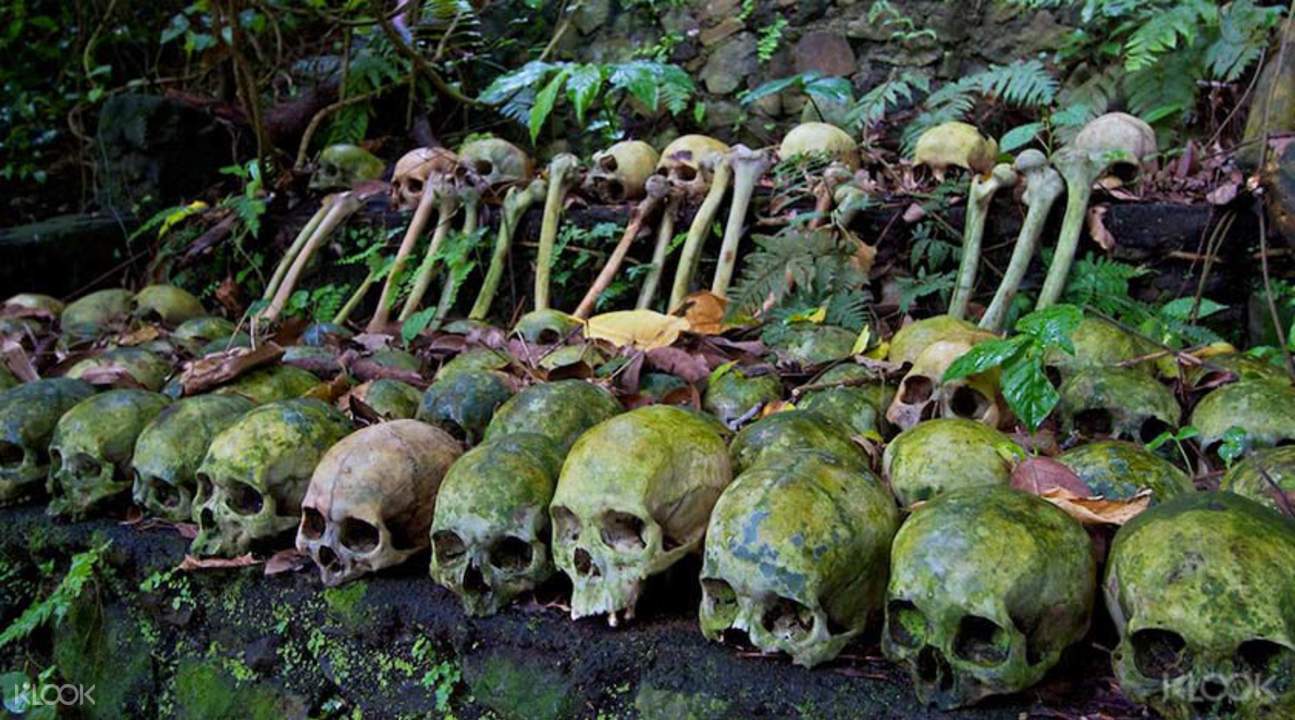 Trunyan village there are 3 places of burial procession according to three different types of death. Natural, unnatural death and burial of infants and young children.

As for residents who are adults but not yet married, they will be placed in Sema Muda (Miarta Yasa's house).

Although you could say the Kintamani Bali tourist attraction, Trunyan, is a little scary, but many tourists visit there, both local and foreign tourists.

This Toya Bungkah Tourism Object has been managed by Batur Pekraman Village which was later named Batur Natural Hot Springs. 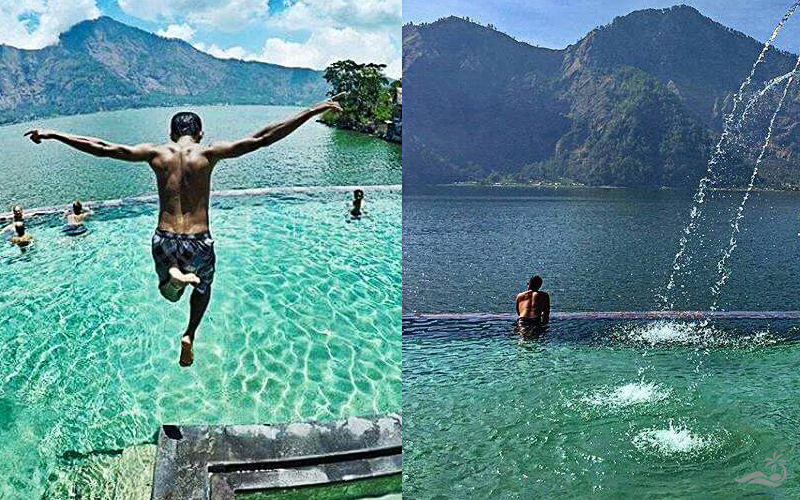 In this tourist attraction, visitors can enjoy the sensation of soaking and bathing in hot showers with temperatures between 29 s / d 39 degrees Celsius.

Toya Bungkah Kintamani, you can see the view of Lake Batur closer to the expanse of blue lake water right in front of your eyes.

There are 4 types of pools in the Toya Bungkah Kintamani bath, namely:

Yes, indeed the names are both similar which means "a temple located next to the headwaters of the lake".

However, the place and location of these two temples are different from one another. Ulun Danu Batur Temple is located not right on the edge of the lake like Ulun Danu Temple in Beratan.

But even from this temple you can still see the beauty of Lake Batur and Mount Batur at once. 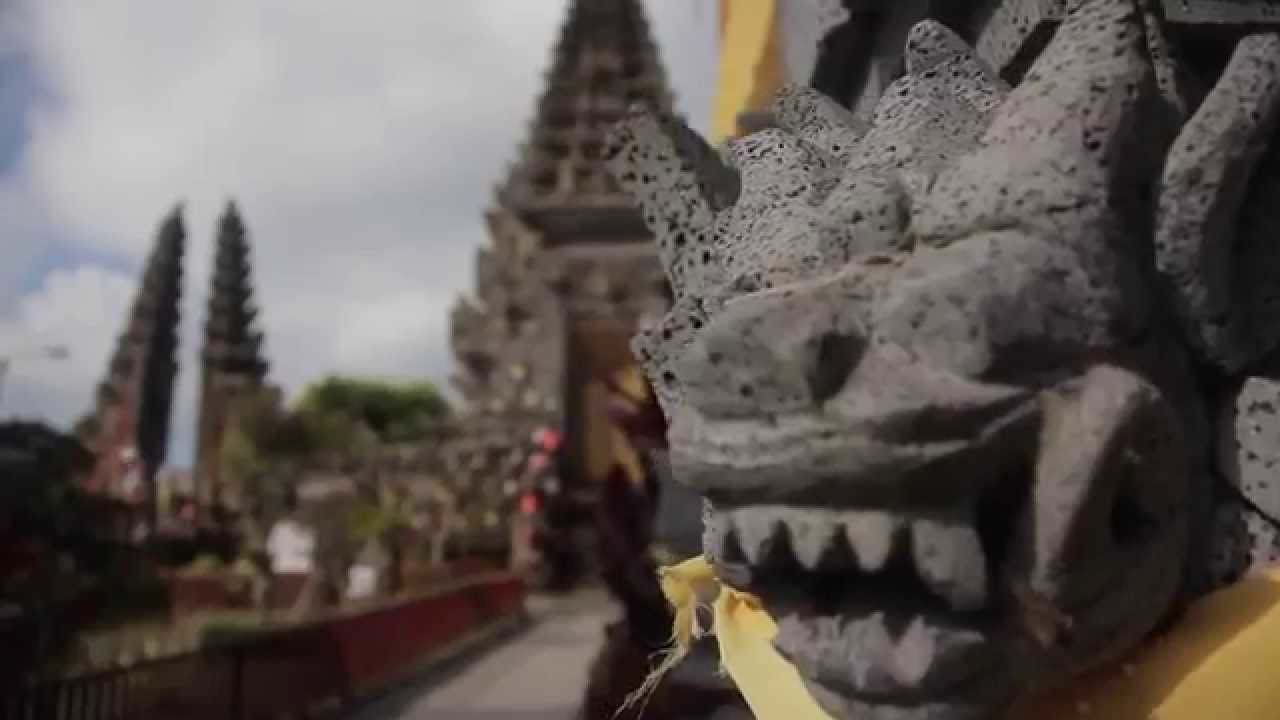 To the north of Kintamani Penelokan, it is located in the village of Kalianyar, Kintamani Bangli district, or rather on the side of the road on the Singaraja route to Denpasar.

Previously this temple was located on the southwest slope of Mount Batur, but after the Mount Batur disaster erupted in 1917, the temple area was destroyed.

But there is still one pelinggih that still stands firmly towering up until now.

Tourists who are fond of historically valuable architectural art attractions will feel happy to be in this temple, a sacred place for Balinese Hindus.

Thus our review on this Kintamani Bali Tourism Page, hopefully this article will be useful for you to choose an alternative tourist attraction in Kintamani Bali. Travelers can also read our other articles such as;

And also our tour promo package offers such as;

Happy holidays and have fun, your satisfaction is our happiness.

Appreciate us if Gotraveler leaves and trace here.

If you liked this article, then please subscribe to us YouTube Channel for support us in presenting tourist video forward. You can also find us on Instagram or direct to Whats-app me to consult your travel plans.